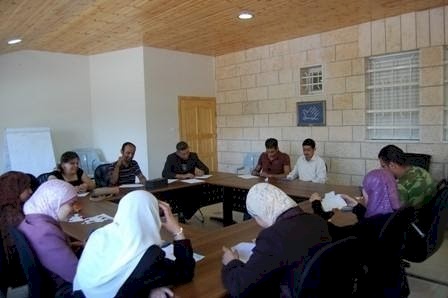 "Youth Empowerment and Leadership Project" was designed and implemented as a response to the reality of disability movement in Palestine. The project was to complement the efforts made in various aspects including human rights and other issues related to persons with disabilities. As well, it represented the philosophy adopted by QADER which is based on the human rights based approach in its work with persons with disabilities. The project was implemented in partnership with The Italian Association for Solidarity Among People (AISPO), and funded by the the Italian Ministry of Foreign Affairs

The project had the following objectives:

Participants in the project were 14 young men and women with disabilities from Bethlehem and Hebron governorates. Disabilities of the participants are mainly sensory and mobility, and their ages are between 19 - 26 years old; most of them are university students, and the others

The training was an essential component of the project and was implemented over a period of seven whole months with a total of 120 training hours. The trainings comprised of several themes; as follow:

The project included a cultural exchange visit for the participants to the Syrian Arab Republic for 8 days, where the trainees have visited various organizations there, participated in transferring and acquiring experiences with members of the organizations in Syria. In addition it included visits to a number of historical, religious and touristic sites in Syrian which had a positive impact on the participants. The training has been implemented with a group of young people from Syria, which in turn gave the opportunity for trainees to exchange experiences with other youth groups.

The implementation of this component came at last; crowning all the efforts that haven made during the project. The participants worked, with the assistance and support from QADER, on two main join collaborative initiatives, which are: