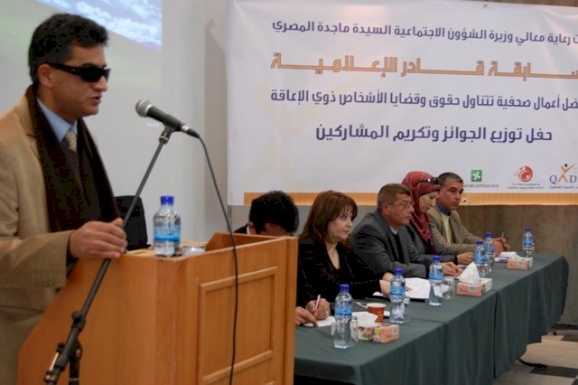 Under the patronage of the Minister of Social Affairs and within the celebrations of World & Arab Day for people with disabilities, QADER organized Media Contest awards ceremony in Ramallah. QADER awarded 3 best works (video, audio, written) on the rights and issues of PwD. Also, all participants were honored.

The ceremony was held in the presence of Mr. Issa Qaraqe’ the Palestinian Minister of Detainees and Ex-Detainees Affairs, and Mr. Anwar Hamam Undersecretary Assistant for the minister of  Social Affairs and a number of journalists and media organizations that are concerned with the affairs of disability.

The contest aims to promote and highlight the role of Palestinian media in supporting the rights of PwD’s.

Ms. Lana Bandak the Director General of QADER emphasized the important role of the media in influencing the public policy and putting some pressure over the decision makers. These efforts will not only assist in the enactment of laws and legislation, but also to encourage them to be applied and implemented on the ground which bring about the needed changes.

For his part, Mr. Anwar Hamam transferred the greetings of the minister of Social Affairs Ms. Majda Almasry. He also invited the media organizations to show more interest in issues of PwD’s and their rights. He stressed out that the media has always been a key factor in shedding light on issues related to disadvantaged and vulnerable groups. And that the media have an important role in serving the important issues concerning PwD’s.

At the end of the ceremony, winners were announced and handed over their awards:

1. Mr. Uday Ghazzawi, type of video media entitled "a Space for Expression," which was broadcast by Palestine TV

2. Ms. Nadine Alseify, audio media, the work entitled "Community Chat on the acceptance of  PwD’s," which was broadcast by Angham & Ajyal radio station.

3. Ms. Rana Khmus, written media through the work entitled "eradication wombs ... a crime or a mercy against girl with disability?