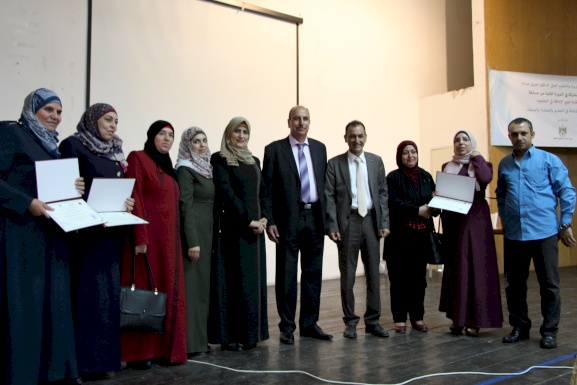 Jerusalem - In partnership with the Ministry of Education, QADER for Community Development and AISPO recognized 30 schools within the Jerusalem District in a ceremony to honor their initiatives that aimed to integrate students with disabilities within their schools.

The ceremony, which was entitled "Promoting the Rights of Students with Disabilities in Education", was hosted by the Minister of Education, Dr. Sabry Saidam, and with the participation of the Italian Agency for Development Cooperation.

Mr. Samir Jibreel, Director General of the Directorate of Education in Jerusalem, welcomed the attendees, stressing the importance of working to include the rights of students with disabilities in the educational context and to integrate them into schools efficiently and effectively, especially in Jerusalem.

“We congratulate the effort and achievements of our schools,” said Ms. Samira Mufreh, Director of the Board of Advisors at the Jerusalem Governorate, who attended on behalf of the governor. “We commend the important role of QADER and the Italian partners and funders for the support they provide to students and institutions that advocate for persons with disabilities.”

Mrs. Lana Bandak, Director General of QADER thanked the attendees and the schools that participated in the competition and emphasized the importance of QADER’s partnership and cooperation with the Ministry of Education.

Mrs. Bandak also highlighted the significant and strategic role of the Ministry of education in integrating students with disabilities in schools and for raising the number of educated people with disabilities.

Ms. Veronica Bertuzzi, representative of the Italian Agency for Development Cooperation, spoke about their belief in the importance of working to fulfill the rights of people with disabilities. She also pointed out that Palestine signed on to the International Convention on the Rights of Persons with Disabilities in 2014 and stressed the need for cooperation among all parties to work to adhere to the international convention, as well as the Italian government's interest in this sector and its appreciation for the role played by the AISPO and QADER in this area.

On behalf of Dr. Sabri Saidam, the Minister of Education, Mr. Mohammad Hawwash referred to an announcement made by the Minister of Education, Dr. Saidam, following  the first competition in 2017, where he stated that “any teacher who can integrate any student with disability or succeed in bringing them back to school can be nominated for the Excellence and Creativity Award", and that teachers must take advantage of this opportunity provided by the Minister.

This school competition ceremony was held  through a cooperation agreement between the Ministry of Education and QADER within the "Comprehensive Development in Education, Health and Protection Project". It is funded by the Italian government, in partnership with AISPO.

Thirty schools in Jerusalem District participated in this year’s competition by implementing various initiatives that support the rights of students with disabilities to inclusive education.

The ceremony was organized in order to honor the participating schools and announce the winners, which were: Modern Mixed Kindergarten B, Dar Al-Fatat Refugee Primary School, and Zahrat Al-Madaen School from the Jerusalem District. And the winners from the Jerusalem Suburbs District are: Beit Ajza Elementary Mixed School, Hizma Elementary School for Girls, and Bir Nabala Girls High School.